All About The Wonderful Allium Flowers

The Allium Flower is a bulbous perennial and has been used to bridge the gap between spring and summer.

Alliums are incredibly long-lived, blooming for weeks on end, and are associated with early spring.

The wonderful Flowers, which are a favorite among bees, produce beautiful pompon flowers in shades of purple and pink, making them a pleasant ornamental plant when planted in masses.

In addition to making excellent cut flowers, Alliums can also be used in dried flower arrangements.

Most varieties of alliums are easy to grow and increase yearly if their needs are understood.

With some 690 species and several varieties of alliums available, they enjoy a devoted following among gardeners.

First to flower, and often showing color simultaneously as the daffodil, is the delicate woodlander, Allium paradoxum var. normale.

This has nodding heads of white, almost translucent, bells, and a single, rather flat-leaf that curls over backward. It is wild in Persia’s woods and hills, in the moist forests at the south end of the Caspian sea. It is essential to get var. normale as var. paradoxum is a terrible weed, with a head of bulbils in place of the flowers, spread far and wide into new plants.

There are other early flowering white varieties of alliums of lesser value. Allium triquetrum, the three-cornered garlic, has flowers like white bluebells, with a green stripe on the back of each petal. ‘Three cornered’ refers to the triangular stem. It is tender, common by the sea in Cornwall and along the south coast. The wild ramson, Allium ursinum, with round heads of starry, white flowers, and broad bright green leaves, is an excellent foil for the purple wood spurge, Euphorbia amygdaloides var. ‘Rubra.’ 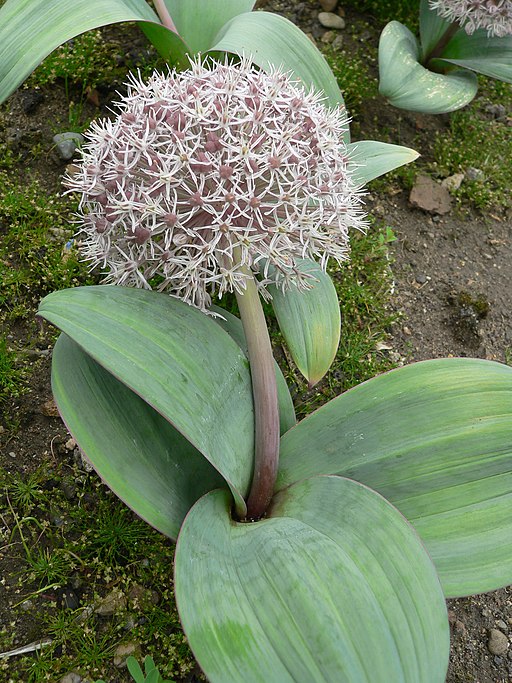 Some varieties of alliums flower in May; their broad leaves emerge in early spring, and the flowers appear at the beginning of summer, in May and June. They come from rocky hills and screes in eastern Turkey, Iran, and Central Asia. Allium karataviense is the earliest of this group, with one or two broad, bluish-grey leaves flat on the ground and stemless round balls of pinkish flowers; it needs an open, dry position and full sun. 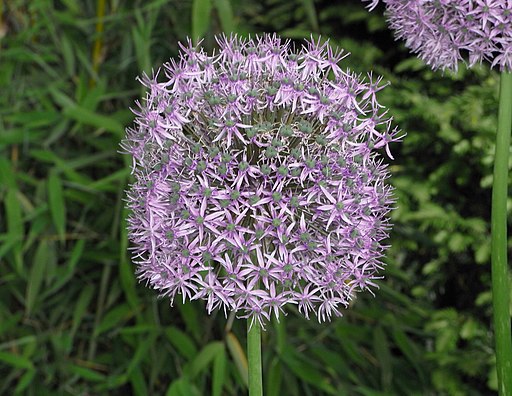 The exact position suits Allium bodeanum, one of the best of all cultivated allium flowers, but still rare in cultivation. Its broad, glaucous leaves show off the giant heads of shining flowers. The shine on the flowers is also a character of Allium cristophii, which flowers in June on a 60cm stem after the leaves start to wither. It has been famously shown at Rosemary Verey’s garden at Barnsley House, Gloucestershire, planted beneath the laburnum tunnel.

Tall bare stems are features of a broad group of similar species, which have large dense heads of purple flowers and broad leaves that need room to develop unhindered if the flower heads reach their full size. Breeders have produced some delicate garden plants in this group. Allium giganteum is one of the best.

‘Gladiator’ is one of the improved varieties of alliums, while ‘Globemaster’ has similar heads on shorter (90cm) stems. Originating in northern Iran mountains, these need a warm position in good, rich soil in the garden to survive for longer than few years.

But not all of the Flowers contain well-developed allium flower bulbs. Common chive, Allium schoenoprasum, is a typical example and is pretty at the front of a border and the herb garden. Various colors are available, including purple, pale pink, and white. 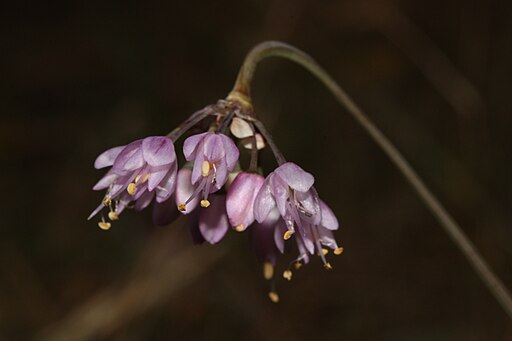 A more striking perennial is Allium cernuum, which forms clumps of flat leaves and nodding umbels of flowers; the white form is rare, but there is ‘Hidcote,’ which is one of the improved varieties of alliums. 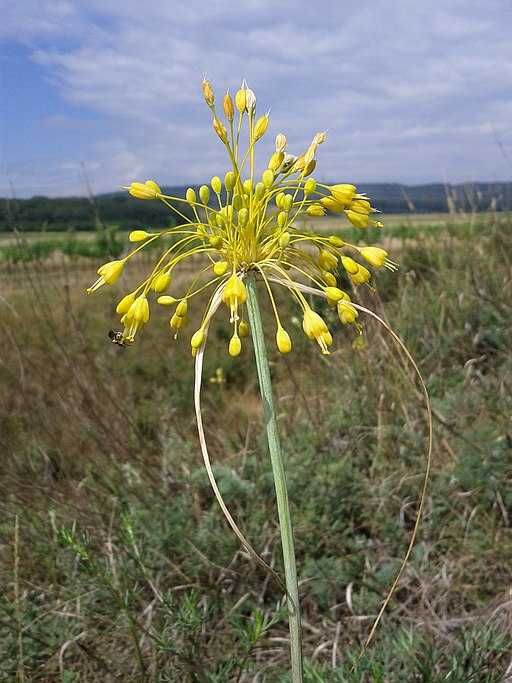 Some of the smaller, tough, and wiry varieties of alliums begin to flower in late July. Their flowers are small but produced in large numbers, spraying out from the top of the stem on thin stalks. Found wild in southern Europe, the flowers appear after the leaves die away. Allium flavum has yellow flowers and striking, almost white stems; in Allium paniculatum, the flowers are usually bright pinkish-purple, and there are pink and white forms, too. Both are about 30cm high. Allium azureum is taller, with tighter, round heads of bright blue. All three thrive in sandy soil in full sun and are helpful, being at their best in early autumn. 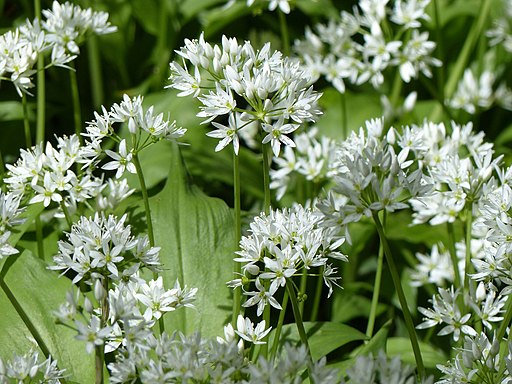 Only a few ornamental onions are guilty of possessing a garlic-like odor from their blooms, for example, Allium ursinum. If there is any scent, it is quite pleasant. Other alliums have also been accused of an invasive tendency. Still, as long as you avoid any with bulbils attached to their flower-heads, which aren’t very garden-worthy anyway, you won’t need to worry about alliums spreading too enthusiastically.

How To Grow Allium Flowers From Bulbs

I recommend ornamental allium flowers for those who want to make their garden look like they have been taken to the next level of design.

These plants are easy to grow, giving you a huge amount of beautiful bloom in a very small space.

Where To Plant Allium Flowers

All allium flowers prefer an open, sunny situation and well-drained soil. If left undisturbed, they will form large clumps. These can be split into smaller chunks during Autumn, which is also the time for planting new allium flower bulbs.

They do not care about the kind of soil they are growing in. The taller varieties of alliums should be planted towards the back of a border, and the shorter plants towards the front. The strappy leaves of allium flowers make them a good choice for growing in containers as long as they are not a burden.

The foliage of alliums is produced before the flowers appear. The result is that these plants are often better suited to the middle of a border, where they will be mostly noticed for their flowers, whereas the faded foliage will go unnoticed for the foliage color.

The best way to conceal their unsightly strappy leaves once they flower is by growing them among low-growing, soft-growing plants, which will cover them up perfectly after flowering. Allium foliage should be allowed to die down naturally after blooming, and you may want to leave flower heads on the plant as the flowerheads themselves look attractive in their own right, particularly in winter.

When to Plant Allium Flowers

During the fall, allium flower bulbs are typically planted when they’re dormant, and that’s perfect for planting when you want to enjoy your plants for an entire season. Though they are quite resilient in a dormant state and will tolerate waiting, it is better for them to be planted a couple of weeks before the ground freezes. The plants will begin to grow roots after they are planted, and you can expect blooms to appear in late spring or early summer.

How to Plant Allium Flowers

There are several varieties of alliums that can be planted en masse. It is recommended that you plant the allium flower bulb on the ground 10-15 cm deep and 10-15 cm apart, depending on how large it is. It’s probably best if you plant in good drifts instead of twos and threes, as this stops the plant from looking kind of dotty.

The bigger varieties of alliums can be planted in groups or separately at a depth of 15cm, but they require a lot more space for their much larger heads. ‘Purple Rain’ should be spaced at least 30cm apart, and ‘Globemaster’ should be spaced between 30-45cm.

Plant your allium flower bulbs deeply, at least twice the depth of the bulb inside the ground, which will enable them to grow stronger and longer. In addition to the hole or trench, spread a 7cm (2.4 in) layer of grit or spent compost all around its base. In addition to pushing your allium flower bulbs thoroughly into the bottom of the trench/hole, leave at least a space of three times the width between one bulb and cover them up. In general, a good guideline is to mix 1/3 grit to 2/3 soil with the heavy soil.

It is also a good idea to firm the ground with your hands after planting to avoid any air pockets, which will be improved even further with watering.

It’s worthwhile to give most spring-flowering allium flower bulbs a potash feed in the early spring, especially if the soil is poor. This also helps promote root structure and bulb growth, which in turn encourages the plants to flourish again and again for years to come.

Even gardeners with small gardens can plant alliums in containers. If large drumstick blooms are what you’re after, the dying foliage can be disguised behind either a few pots of bushy annuals or a clipped box for a more formal look.

Always use a reasonably deep container, especially for more significant varieties of allium. As a rule of thumb, plant three times the depth of the bulb in well-drained compost. This also applies when planting in the open ground.

Although the container plants will need repotting into fresh compost every year, specimens in the soil need little further attention. As long as the soil is reasonably fertile, they should not require extra feeding as long as their foliage is left to die back naturally. This enables allium flower bulbs to build up energy for the following year. Like some other bulbs, they are naturally long-lived and survive for years if left undisturbed.

A bulb planted in a pot should be planted at the same depth as a bulb planted in the ground. It is important, however, that the largest bulbs have approximately 4cm of compost below them. Put a generous layer of grit on top of the compost and top-dress it with a good quality multi-purpose compost.

You can plant multiple allium flower bulbs in larger pots in a layered fashion so that they are one bulb width apart. Plant one layer of each variety, then another layer of another variety, and so on, with the smallest bulbs making their way closest to the top. Cover the soil with a layer of compost and firm it up.

How To Grow Euphorbias – 2 Best Ways

How to grow Euphorbias is decided by taking many different factors into account. First, you need to choose some varieties of Euphorbias that you like. Then you need to find the best location for Euphorbias in your garden and plant the potted plants in the right soil-mixture. If you aren't sure how to plant Euphorbias in pots or how to care for Euphorbias, read our Plant Care And Growing Guide.
Read More

How To Grow Delphinium Flowers

Many People wonder how to grow Delphinium Flowers in their gardens today and some are avoiding planting these plants due to the fact that they have been marketed as hard to grow. There is no denying the fact that Delphinium flowers require a ton of attention, however if taken care of properly, they are an extremely rewarding flower.
Read More

All kinds of orchid flowers can thrive in a wide variety of environments, including mountaintop, bog, grassland, and rainforest. More than 35,000 varieties of orchids inhabit our planet, and there is a good chance that many more unknown varieties of orchids will be discovered in the future.
Read More

There are a number of reasons why Hellebores are popular. Hellebore flowers are easy to grow and require low maintenance. These Flowers look great from January until May and even after seeds have set, their sepals persist in their handsomeness, eventually turning green.
Read More

There is an iris flower for every condition, dry or wet, sunny or shaded, arid or fertile. Indeed, there are 300 of them. The Iris Register, begun in 1930 to record all new varieties of iris flowers, currently lists more than 62,000.
Read More